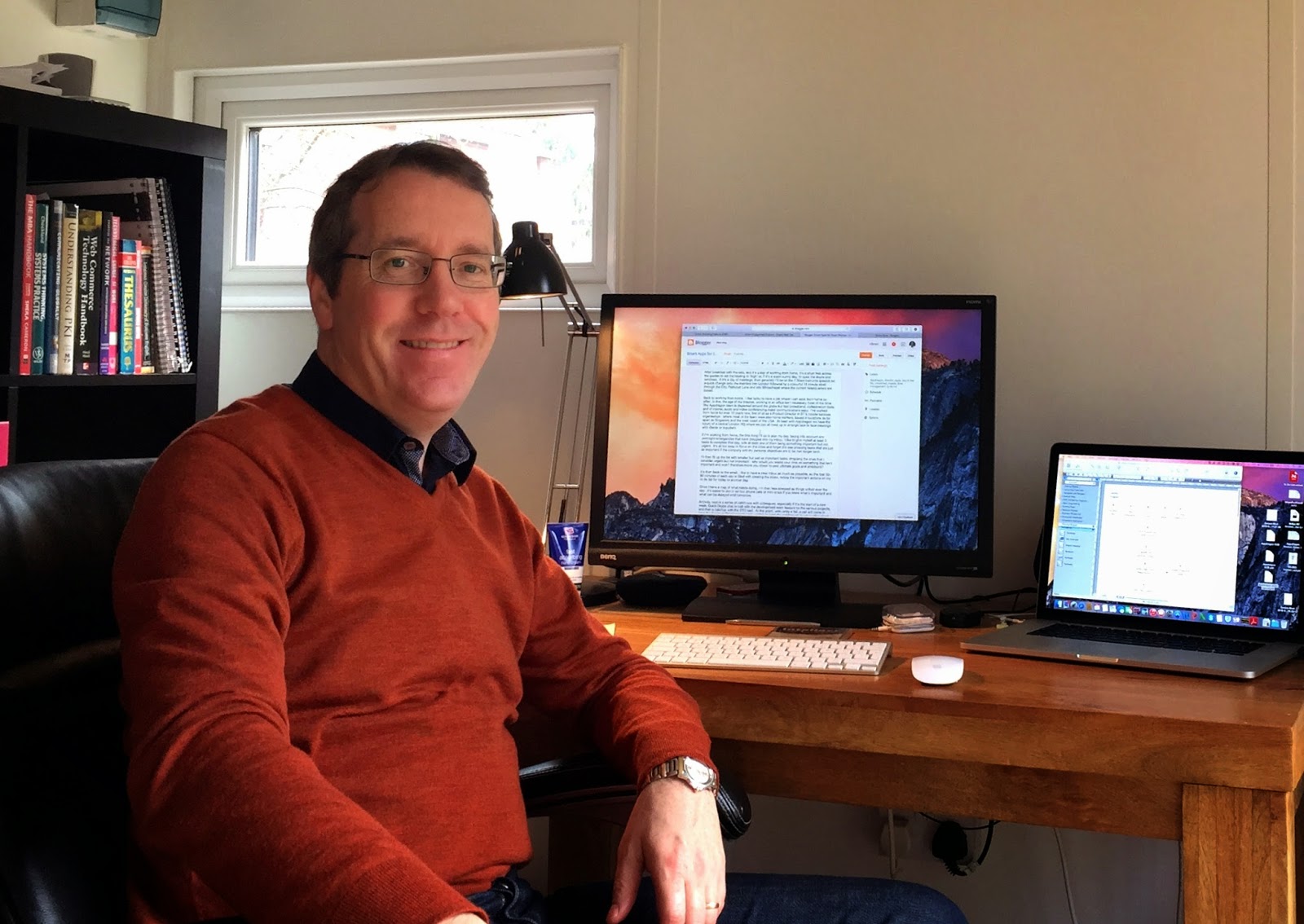 As in any technology start up, every day working at Appdragon brings its challenges, its downs (thankfully just a few), its highs (gratefully many) and, of course, every day is unique.

A typical day for me, as for the other directors, starts at around 6.30am with a quick check of the email in box on my iPhone and setting my Skype status to "online". A bit early I know, but when you work so closely with the middle east and Asia, you want to maximise the parallel working time. For me, night time is family time, so my Skype status switches to "Away" after 8pm.  Everyone in the team knows how to get hold of me if there's an emergency (or preferably they try our CTO Neil first instead!), so being online 24x7 isn't a necessity - just yet.

After breakfast with the kids, and if it's a day of working from home, I struggle through the rush hour (usually a few birds pecking on the grass) with just a short trek across the garden to set the heating to 'high' or, if it's a warm sunny day, to open the doors and windows.  If it's a day of meetings, then generally I'll be on the 7.30am train into Ipswich for a quick change onto the mainline into London followed by 80 minutes of quality working time on the train, and then a 15 minute stroll through the City, down Petticoat Lane and into Whitechapel where the current headquarters are based.

Back to working from home.  I feel lucky to have a job where I can work from home so often. In this, the age of the Internet, working in an office isn't necessary most of the time.  The Appdragon team is dispersed around the globe but fast broadband, collaboration tools and of course, audio and video conferencing make communications easy.  I've worked from home for over 10 years now, first of all as a Product Director in BT's mobile services organisation - where most of the team were also home workers, based in locations as far apart as Singapore and the west coast of the USA.  At least with Appdragon we have the luxury of a central London HQ where we can all meet up or arrange face to face meetings with clients and suppliers.

If I'm working from home, the first thing I'll do is plan my day, taking into account any overnight emergencies that have dropped into my inbox.  I like to give myself at least 3 major, pressing tasks to complete that day, with at least one of them being something important but not urgent.  Otherwise it's all too easy to focus on the emergencies and forget the less pressing tasks that are just as important.

I'll then fill up the list with smaller but just as important tasks, dropping the ones that I consider urgent but not important - why would you waste your time on something that isn't important and won't therefore move you closer to your ultimate goals and ambitions, just because someone else thinks it's important?

It's then back to the email. I like to have a clear inbox as much as possible, so the first 30-60 minutes of each day is filled with clearing the inbox, noting the important actions on my to do list for today or another day.

Once I have a map of what needs doing, I'm then less stressed as things unfold over the day.  It's easier to slot in ad hoc phone calls or mini-crisis if you know what's key and what can be delayed until later or tomorrow.

Anyway, next is a series of catch ups with colleagues, especially if it's the start of a new week. Most days there'll be a Skype chat or call with the development team leaders on the various projects, and then a catchup with the CTO Neil.  At this point, with rarely a fail, a call will come in from the Business Development team, unable to keep the excitement of yet another client lead to themselves! Interruptions with the promise of new business is always welcome though.

Once we've all caught up with each other it's into the individual tasks on my to do list for the day.  Quite often this will mean designing a feature, data model or UI screens for the latest app we're working on, or briefing the designers if it's a major piece of work.  At the moment Neil and I are spending a lot of time on Quality documentation as we prepare for our ISO 9001 accreditation.

I may spend time on Skype and email with the developers, working out some detail on GUI design, trying to fathom a client requirement or helping fix a bug that just won't go away despite all logic suggesting it shouldn't even be there.  My background in programming as a teenager comes in handy in these situations and Neil or the dev team are always on hand for the stuff that's too technical.

It's then catching up with the finance and billing teams.  Checking that all due payments have been made or received, signing off purchase orders, preparing invoices and checking and reconciling the accounts and forecasting cash flows.  Online banking means this is a much easier task than it used to be, as you have the current financial transactions at your finger tips.

After a quick bite to eat, on the patio if it's a nice day, or at my desk if it isn't, and a quick stroll clear my head, it's into the afternoon.  Being a morning person, my most productive time is before 2pm.  So I like to get all the creative stuff or things I need to be alert for or concentrate on out of the way early in the day.  For a few hours in the afternoon I let the work carry me along.  I try to schedule phone calls and conferences for the afternoon as the adrenaline of working closely with others keeps me going, or I might let some of the 'urgent' actions dropping into my inbox take some of my time.

I tend to get a second wind at around 4pm so I try to get back to the to do list later on in the day as the creative juices begin to flow again.   I break off to greet the kids home from school when I can, perhaps helping with homework or catching up on their days over a cuppa - this is the real advantage of working from home.  At this point I often migrate back into the house and respond to emails or messages that have come in throughout the day.  Until about 9pm I'll be dipping in and out of my emails, perhaps working on a blog entry or posting on our social media sites, but evening time is generally family time, even if that means watching TV with the kids whilst keeping an eye on my laptop.  It's great that modern technology allows me to work this way, ably mixing a home life with work.  The line of distinction between the two is blurring all the time - which I think is a good thing - although my wife might claim the scales aren't exactly as balanced as they should be! 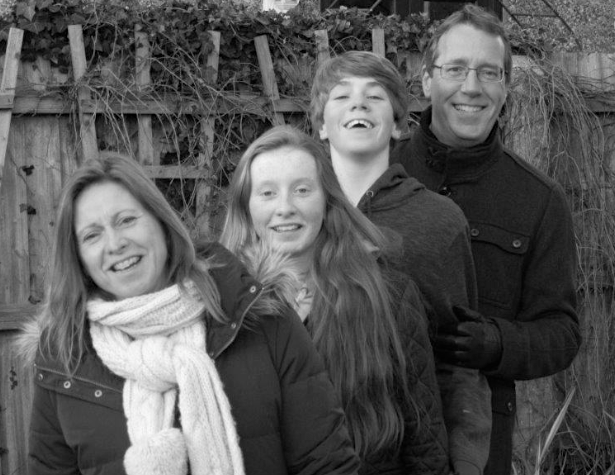 Family gets priority at the weekend. Mobile apps and broadband helps me stay in touch with work.

It's not all work. When I'm not working I like to relax with a game of tennis and I like to get involved with my son's football team whenever I can.  Football is my obsession, especially Sheffield United and I like to listen to radio commentary over the internet whenever they're playing, and try to get to the odd away game as I no longer live near Sheffield. In the warmer months I try to get out on my bike around the narrow, quiet country lanes in Suffolk or, when it's colder or time's constrained (which is all too often), I'll squeeze in a swift walk across the fields and woods nearby.

So that's as typical as a day gets for me. But, to be completely honest, it's difficult to define a "typical" day in reality. It's a bit of a cliche, but in my case it really is true - every day is different and for that I feel truly fortunate.

Email ThisBlogThis!Share to TwitterShare to FacebookShare to Pinterest
Labels: Appdragon, apps, day in the life, director, mobile, smartmed, time management, to do list

Appdragon
We design, develop and support innovative, inspirational and above all useful Android and iOS apps for businesses on a global scale. Appdragon specialises in custom apps for iPhone, iPad, iPod, Android phones and Android tablets. We work closely with our clients to take their original ideas and produce the polished product, something that both our clients and ourselves can be proud of.